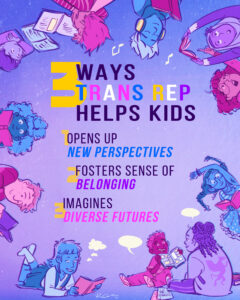 Books are where we go to understand ourselves and the world around us. They can open our minds up to new experiences, give us language to talk about ourselves, and help us imagine expansive new futures for both ourselves and others.

March 31 is Trans Day of Visibility but it’s important affirm and uplift the voices of trans authors all year long. For trans youth, representation can be critical to survival. Books with trans characters make kids of all gender identities more aware—and whether you’re cis or trans, that awareness is critical for acceptance and respect at home, in the classroom, and in every aspect of life.

Trans kids are full, complex people with talents, challenges, and joys! They deserve love, safety, and the ability to recognize themselves in the stories they read. Here’s a list of books celebrating trans identities to add to your TBR list! 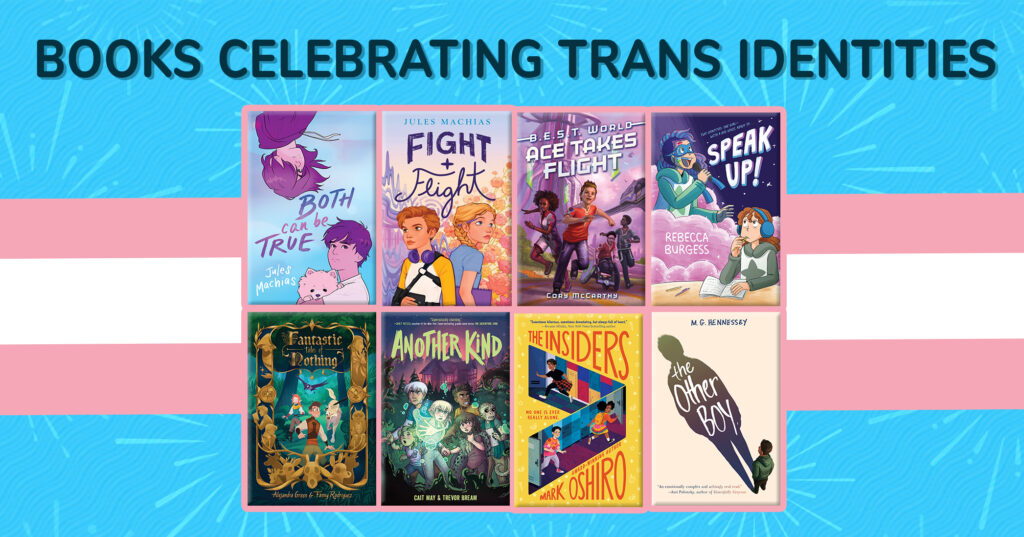 Speak Up! by Rebecca Burgess

Words don’t always come easily for Mia. She gets through school armed with her headphones, listening to music to help prevent sensory overload while her classmates bully her for being autistic. Mia wishes she could just speak up and tell off everyone who makes fun of her, especially her horrible classmate Laura, but expressing her feelings has always been easier through singing and songwriting.

Little do her classmates know that Mia is the up-and-coming singer, Elle-Q! With the help of her musical genius of a best friend, Charlie, Mia has taken the internet by storm under her secret identity.

But when the chance to perform live for a local talent show drives the two friends apart, Mia must decide whether she’ll let her worries about what other people think get in the way of showing everyone who she is and what she has to say. 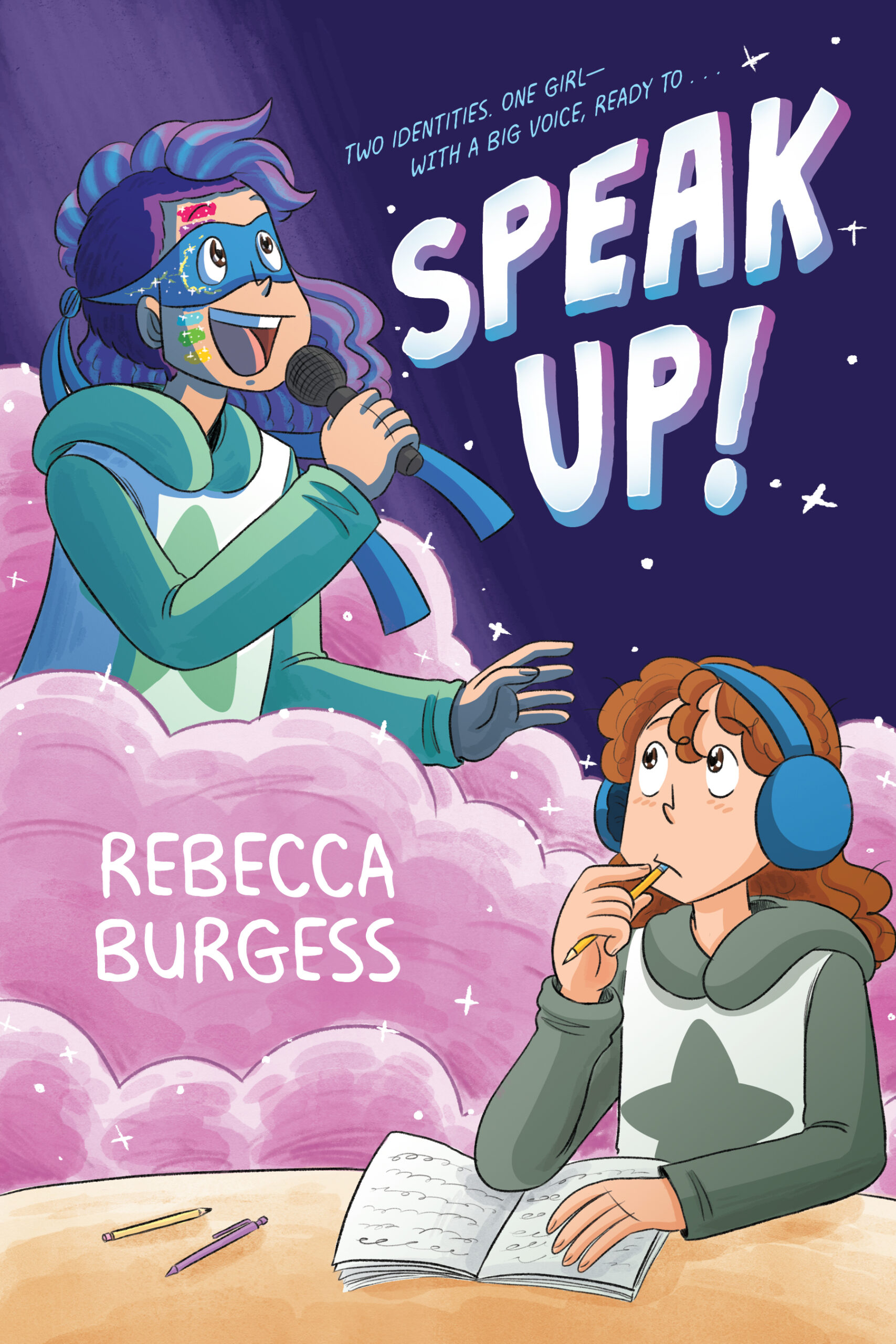 Both Can Be True by Jules Machias

Ash is no stranger to feeling like an outcast. For someone who cycles through genders, it’s a daily struggle to feel in control of how people perceive you. Some days Ash is undoubtedly girl, but other times, 100 percent guy. Daniel lacks control too—of his emotions. He’s been told he’s overly sensitive more times than he can count. He can’t help the way he is, and he sure wishes someone would accept him for it.

So when Daniel’s big heart leads him to rescue a dog that’s about to be euthanized, he’s relieved to find Ash willing to help. The two bond over their four-legged secret. When they start catching feelings for each other, however, things go from cute to complicated. Daniel thinks Ash is all girl . . . what happens when he finds out there’s more to Ash’s story?

With so much on the line—truth, identity, acceptance, and the life of an adorable pup named Chewbarka—will Ash and Daniel forever feel at war with themselves because they don’t fit into the world’s binaries? Or will their friendship help them embrace the beauty of living in between? 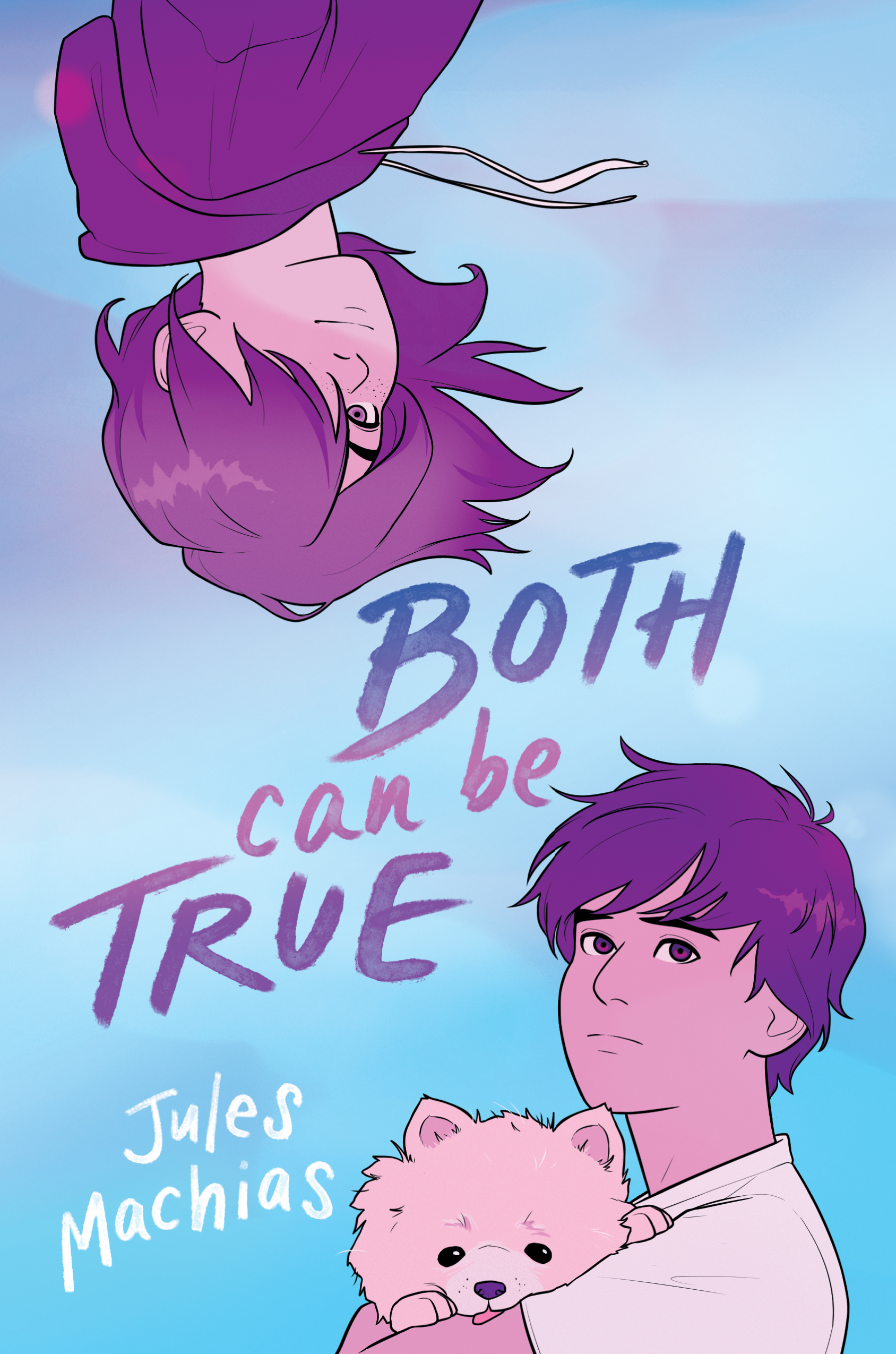 Avery Hart lives for the thrill and speed of her dirt bike and the pounding thump of her drum kit. But after she’s diagnosed with hypermobile Ehlers-Danlos syndrome, a disease that affects her joints, Avery splits her time between endless physical therapy and worrying that her fun and independence are over for good.

Sarah Bell is familiar with worry, too. For months, she’s been having intense panic attacks. No matter how much she pours her anxiety into making art, she can’t seem to get a grip on it, and she’s starting to wonder if she’ll be this way forever.

Just as both girls are reaching peak fear about what their futures hold, their present takes a terrifying turn when their school is seemingly attacked by gunmen. Though they later learn it was an active shooter drill, the traumatic experience bonds the girls together in a friendship that will change the way they view their perceived weaknesses—and help them find strength, and more, in each other. 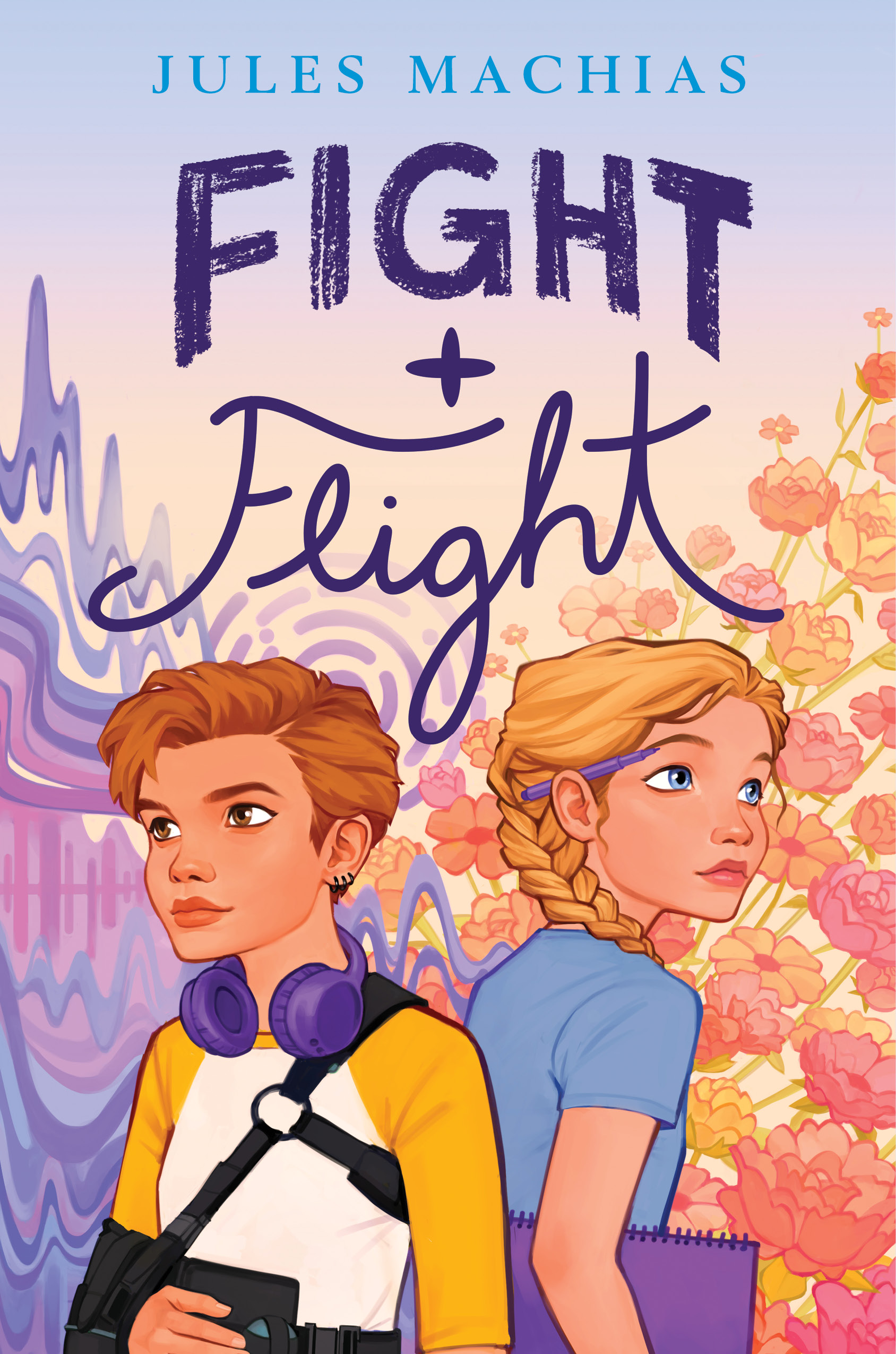 The Other Boy by M.G. Hennessy

Twelve-year-old Shane Woods is just a regular boy. He loves pitching for his baseball team, working on his graphic novel, and hanging out with his best friend, Josh.

But Shane is keeping something private, something that might make a difference to his friends and teammates, even Josh. And when a classmate threatens to reveal his secret, Shane’s whole world comes crashing down.

It will take a lot of courage for Shane to ignore the hate and show the world that he’s still the same boy he was before. And in the end, those who stand beside him may surprise everyone, including Shane. 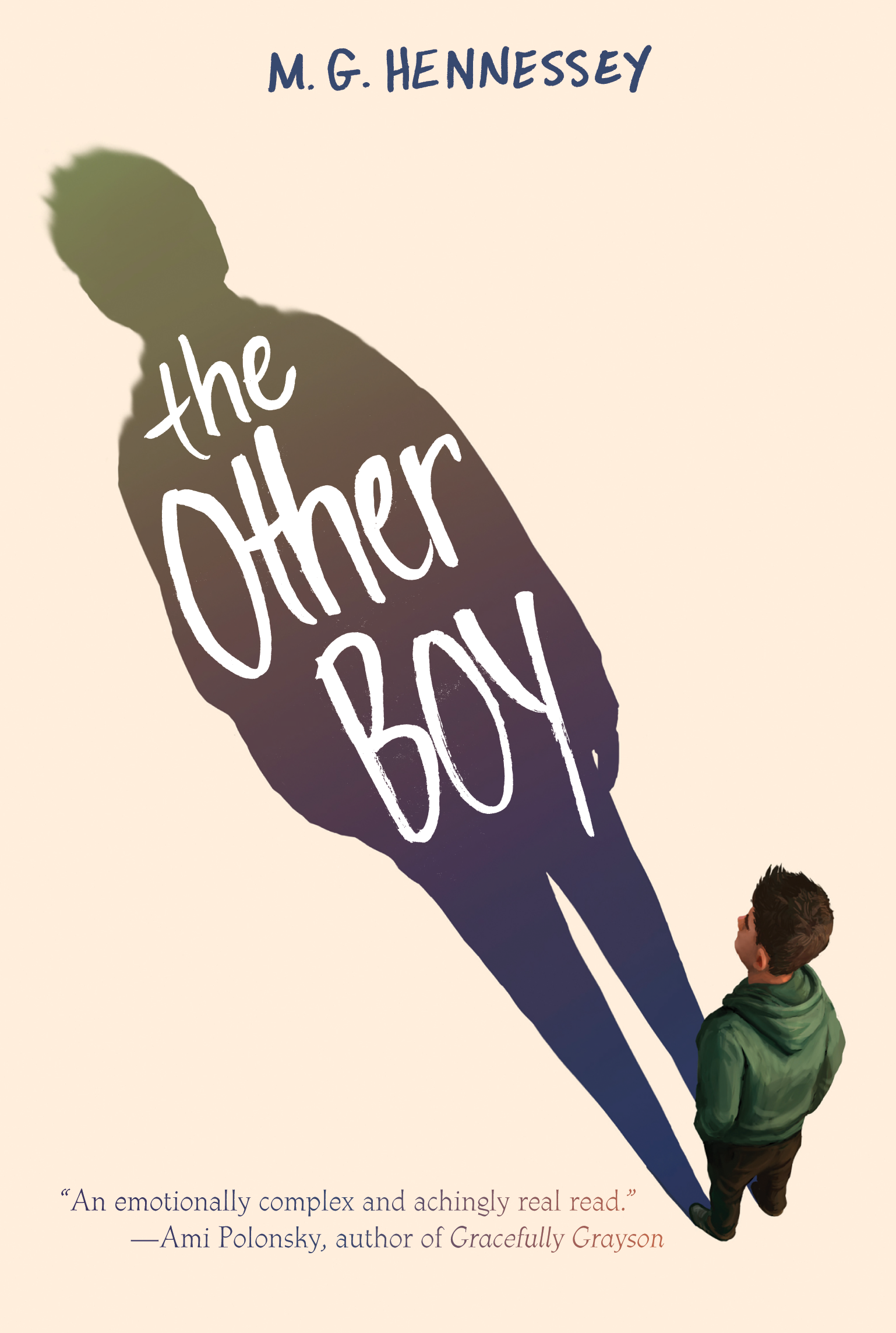 Eleven-year-old Ace Wells’s dream has finally come true: he is a new cadet in the B.E.S.T. (Biological Enhancement Systems Technology) Program. Until now, he’s been living in the shadow of his superstar brother, Finn—but not for long.

This is new Ace! He knows he can make his mark on the world with SuperSoar wings, but on day one, nothing goes as planned. The antagonistic elevator AI Otis wants to eat his belongings, the physical feats set by his tough-nut coach are impossible, and his celebrity roommates are far from welcoming.

It becomes crystal clear that Ace is not prepared to fly—in any sense of the word.

As tensions build, Ace has a sinking suspicion that there’s something more going on at B.E.S.T. than meets the eye. Will he ever make it to graduation and get the aug of his dreams? Join Ace and find out as he tests his strength and grit in this page-turning middle grade adventure! 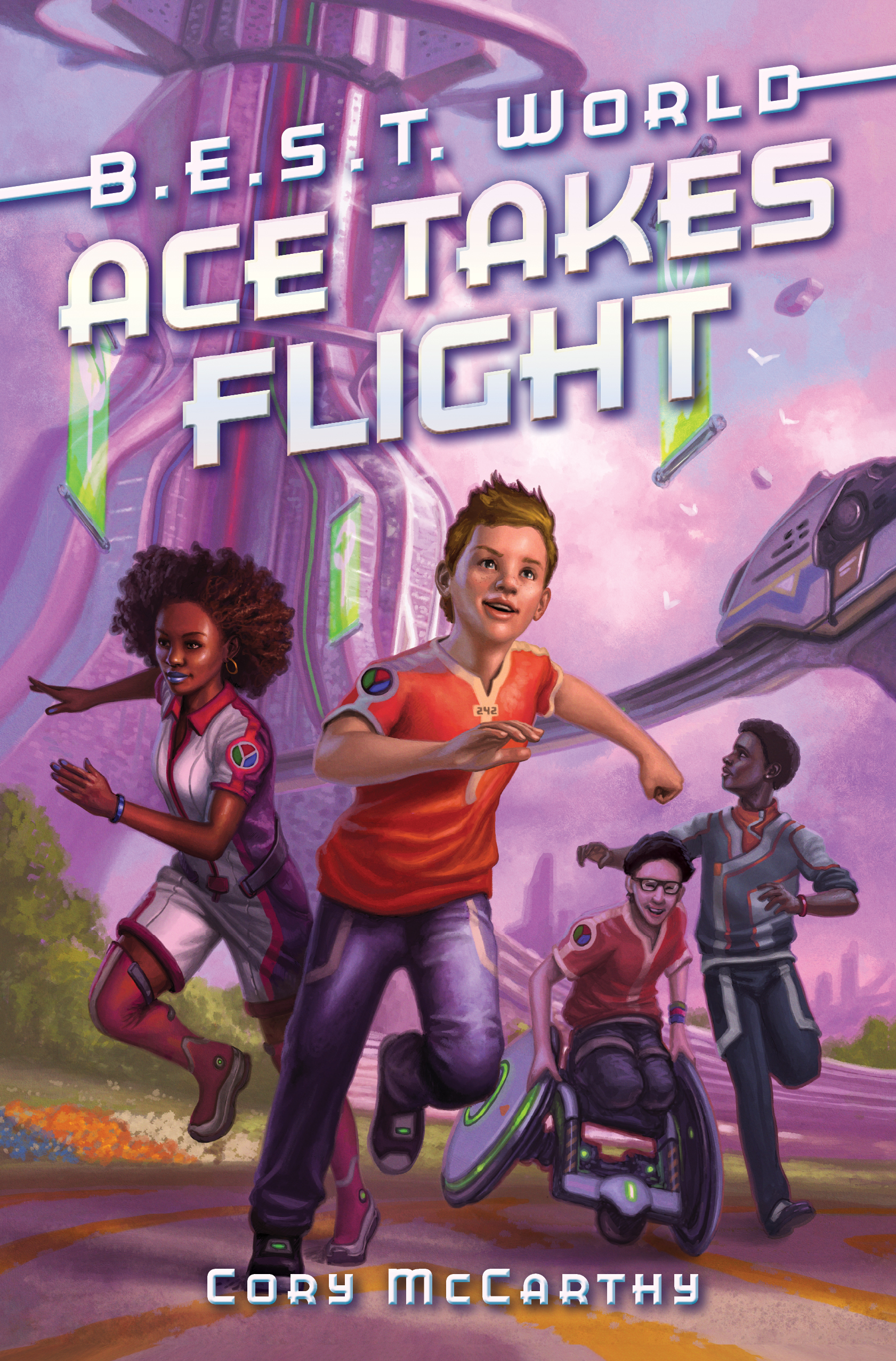 Fantastic Tales of Nothing by Alejandra Green and Fanny Rodriguez

Welcome to Nothing! Despite its name, this is a fantastic land where humans and magical volken coexist peacefully—at least they try . . .

This is the tale of Nathan, an ordinary human (or so he thinks) living an ordinary life (or so he wishes). Everything changes when he meets Haven, a mysterious creature who is neither human nor volken. Oh, and the two of them are being chased by volken mercenaries—a grumpy wolf named Bardou and a delightful crow named Sina.

Nathan soon learns he has mysterious powers, even though humans aren’t supposed to have magic. But there’s no time to dwell on that because this discovery sets the group on a perilous quest across windswept terrain, through haunted forests, and in ancient tombs. Nathan and his unlikely friends must prevent an impending war and defeat a dark evil to save their land.

No pressure, of course. If they fail, everything will turn into, well . . . nothing. 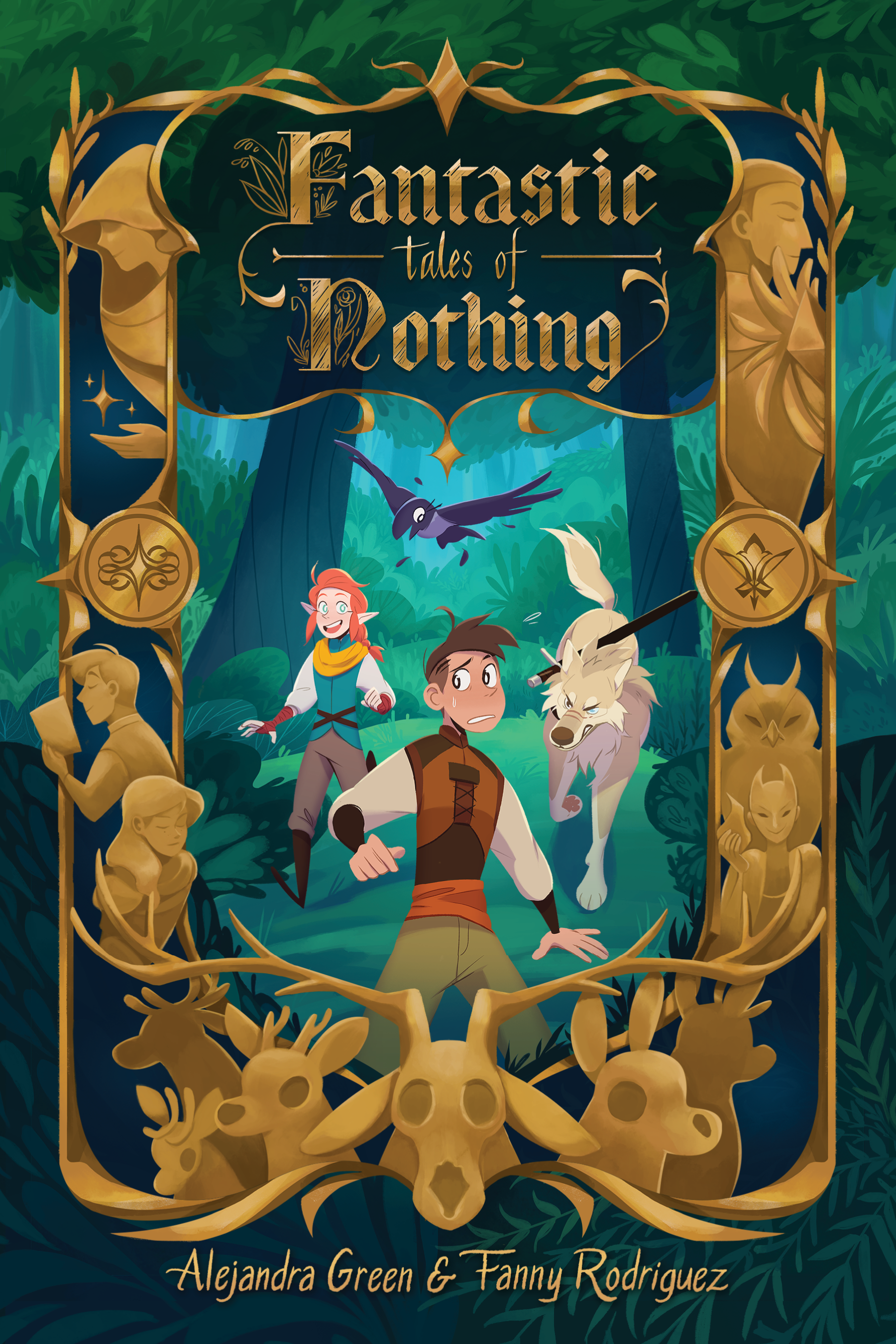 Another Kind by Trevor Bream, Cait May, illustrated by Cait May

Tucked away in a government facility nicknamed the Playroom, six not-quite-human kids learn to control their strange and unpredictable abilities. Life is good—or safe, at least—hidden from the prying eyes of a judgmental world.

That is, until a security breach forces them out of their home and into the path of the Collector, a mysterious being with leech-like powers.

Can the group band together to thwart the Collector’s devious plan, or will they wind up the newest addition to his collection? 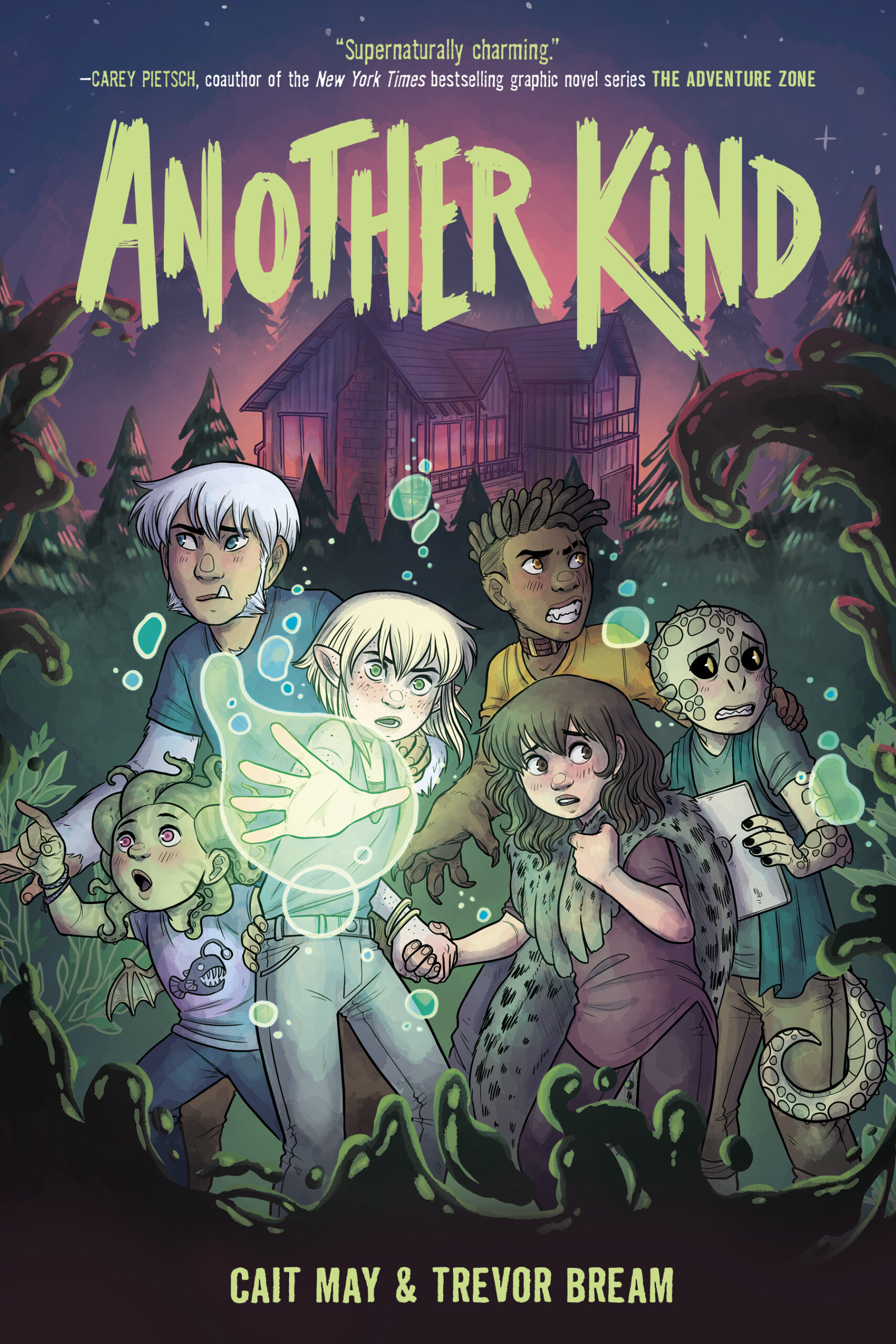 The Insiders by Mark Oshiro

San Francisco and Orangevale may be in the same state, but for Héctor Muñoz, they might as well be a million miles apart. Back home, being gay didn’t mean feeling different. At Héctor’s new school, he couldn’t feel more alone.

Most days, Héctor just wishes he could disappear. And he does. Right into the janitor’s closet. (Yes, he sees the irony.) But one day, when the door closes behind him, Héctor discovers he’s stumbled into a room that shouldn’t be possible. A room that connects him with two new friends from different corners of the country—and opens the door to a life-changing year full of friendship, adventure, and just a little bit of magic. 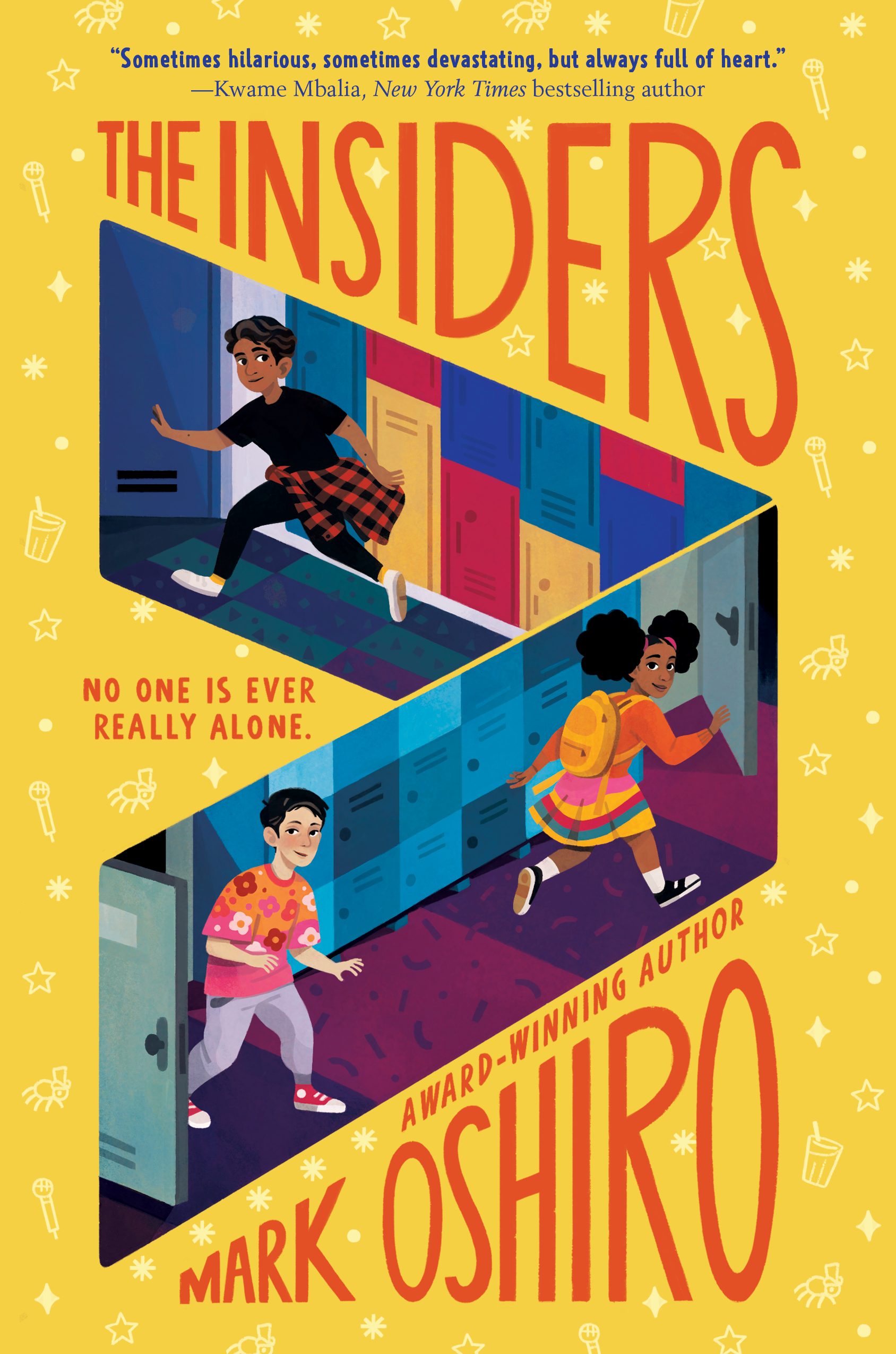 Hazel’s Theory of Everything by Lisa Jenn Bigelow

Hazel knows a lot about the world. That’s because when she’s not hanging with her best friend, taking care of her dog, or helping care for the goats on her family’s farm, she loves reading through dusty encyclopedias.

But even Hazel doesn’t have answers for the questions awaiting her as she enters eighth grade. What if no one at her new school gets her, and she doesn’t make any friends? What’s going to happen to one of her moms, who’s pregnant again after having two miscarriages? Why does everything have to change when life was already perfectly fine?

As Hazel struggles to cope, she’ll come to realize that sometimes you have to look within yourself—instead of the pages of a book—to find the answer to life’s most important questions. 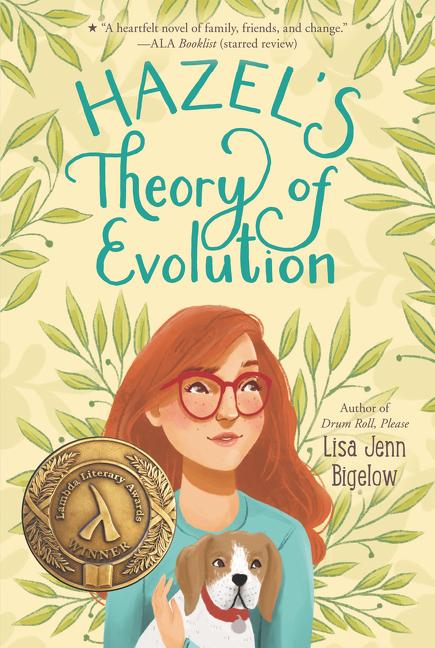 Nemeses! Dragons! Science! Symbolism! All these and more await in this brilliantly subversive, sharply irreverent epic from Noelle Stevenson. Featuring an exclusive epilogue not seen in the web comic, along with bonus conceptual sketches and revised pages throughout, this gorgeous full-color graphic novel has been hailed by critics and fans alike as the arrival of a “superstar” talent (NPR.org).

Nimona is an impulsive young shapeshifter with a knack for villainy. Lord Ballister Blackheart is a villain with a vendetta. As sidekick and supervillain, Nimona and Lord Blackheart are about to wreak some serious havoc. Their mission: prove to the kingdom that Sir Ambrosius Goldenloin and his buddies at the Institution of Law Enforcement and Heroics aren’t the heroes everyone thinks they are.

But as small acts of mischief escalate into a vicious battle, Lord Blackheart realizes that Nimona’s powers are as murky and mysterious as her past. And her unpredictable wild side might be more dangerous than he is willing to admit. 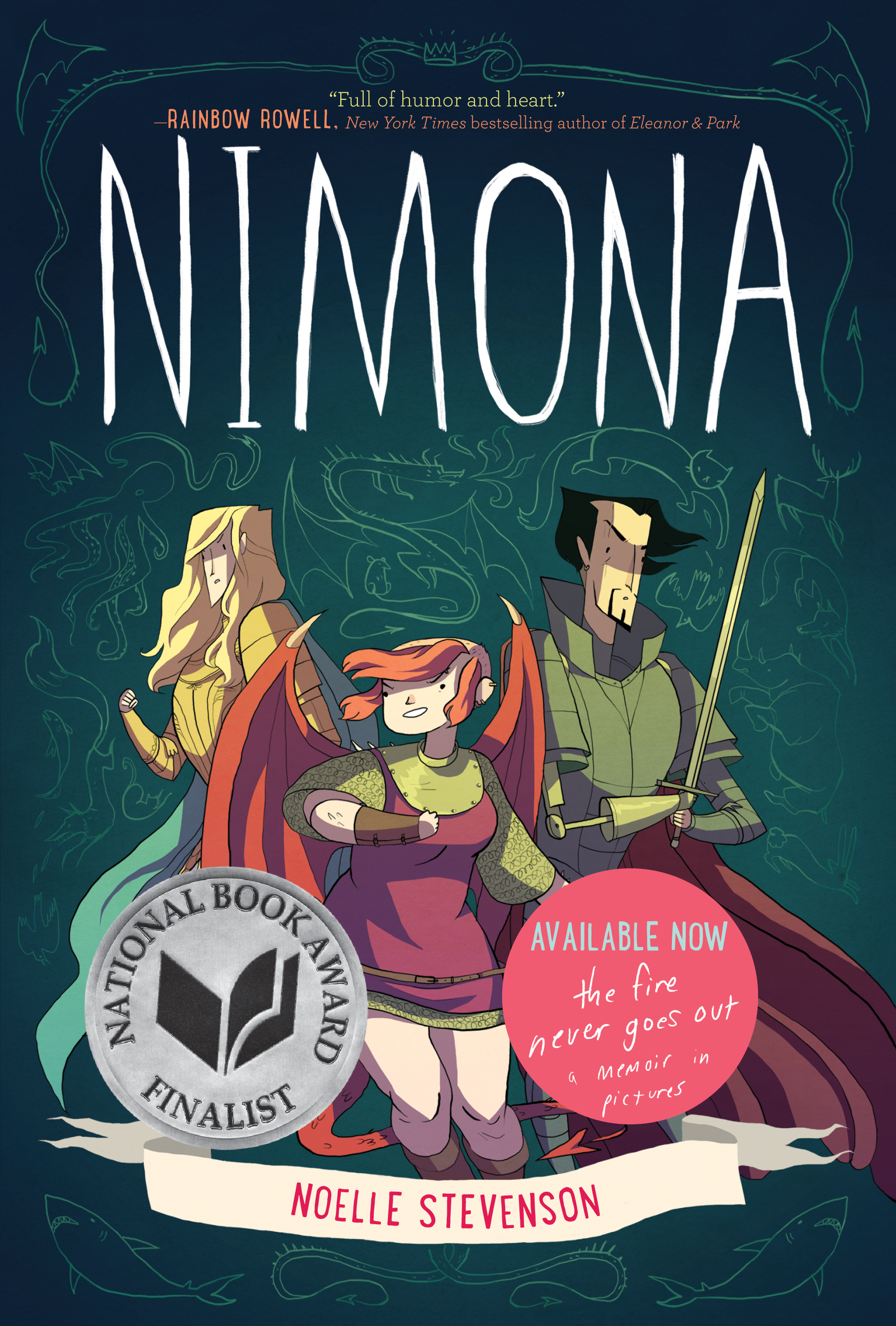