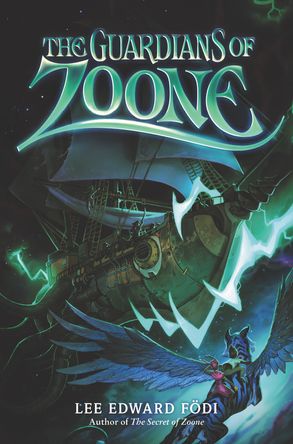 The Guardians of Zoone

In this sequel to The Secret of Zoone, Ozzie Sparks, a blue skyger, a purple-haired princess, and an overprepared aunt must save the multiverse (again) from an evil overlord and his army of automatons.

Worlds of adventure await in this action-packed sequel to The Secret of Zoone, where it’s up to Ozzie Sparks, a blue skyger, a purple-haired princess, and one very overprepared aunt to save the multiverse from an evil robot overlord.

Ozzie Sparks’s life went from normal to out of this world—literally—when he traveled to the station of Zoone, saved the multiverse, and somehow managed to find his way home to his Aunt Temperance. He’d like nothing more than to go back right away, but the portal is stubbornly closed.

Until Zoone comes to him. But his friends Fidget and Tug aren’t dropping in for a friendly visit. An evil overlord and his army of automatons have taken over Zoone, and it’s up to Ozzie, Fidget, Tug, and Ozzie’s usually very normal aunt to defeat them and save the station (again).

Fans of adventures like The Unwanteds and The Glass Sentence will be swept away by the second book in Lee Edward Födi’s fantastically fun multiversal series.