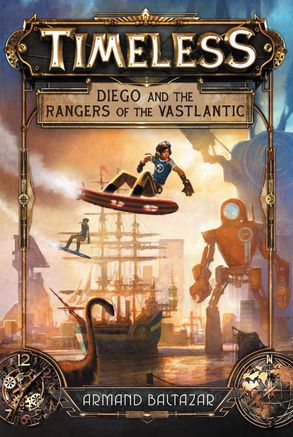 Timeless: Diego and the Rangers of the Vastlantic

This amazing full-color book is a non-stop thrill ride all inside one book! Diego Ribera loves living in a world where past, present, and future coexist together, but when his father, a top engineer, is kidnapped, Diego must do everything he can to stop the evil group from destroying the world as he knows it.
Read an Excerpt

For fans of Rick Riordan and Brian Selznick, author-artist Armand Baltazar introduces Timeless: Diego and the Rangers of the Vastlantic, the first in a new science fiction/fantasy series that explores a world painted new by the Time Collision. Integrating art and text, this epic and cinematic adventure features more than 150 full-color illustrations.

This is the world Diego Ribera was born into. The past, present, and future coexisting together. In New Chicago, Diego’s middle school hallways buzz with kids from all eras of history and from cultures all over the world. The pieces do not always fit together neatly, but this is the world he loves.

There are those, however, who do not share his affection. On his thirteenth birthday, Diego learns of a special gift he has within, a secret that is part of something much bigger—something he cannot understand. When his father, New Chicago’s top engineer, is taken by the Aeternum, Diego must rescue him and prevent this evil group from disrupting the fragile peace humanity has forged.

Take a look inside TIMELESS: DIEGO AND THE RANGERS OF THE VASTLANTIC

Get a peek of the 150+ full-color illustrations inside Armand Baltazar’s Timeless!