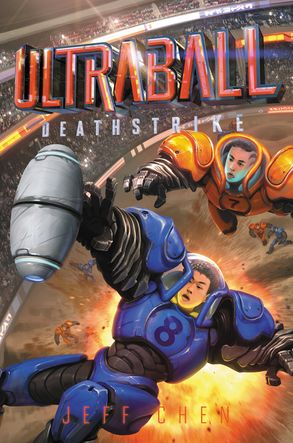 In the next installment of the Ultraball series, Strike must contend with the attacks of a powerful enemy out for revenge as he tries to claim the Ultrabowl before his time on the field runs out.

The stakes are extreme in the second book of Jeff Chen’s futuristic, action-packed Ultraball series. Win-or-lose turns into life-or-death in this thrilling middle grade adventure tailor-made for sports and sci-fi fans.

Strike and the Miners are hungrier than ever for a championship after losing yet another Ultrabowl. When they suffer a shocking defeat in their season opener, Strike knows that something is off with his game, but the secret hampering his play is too large to reveal.

If he can’t perform at the highest level, what chances do the Miners have against the unstoppable Neutrons?

Worse yet, his powerful enemy, Raiden Zuna, knows Strike is hiding something. Zuna offers to help, and Strike is tempted—but the information Zuna wants in return threatens Strike’s friend Boom, as well as the growing Dark Side resistance. When rumors surface about Zuna’s mysterious grand plan, code-named Operation Deathstrike, Strike’s choice could have consequences he never anticipated.

Even as the Ultraball games ratchet up in intensity, with teams using explosive new tactics to reach the Ultrabowl, Strike has bigger decisions to make if he wants to keep his teammates—and the moon—safe.