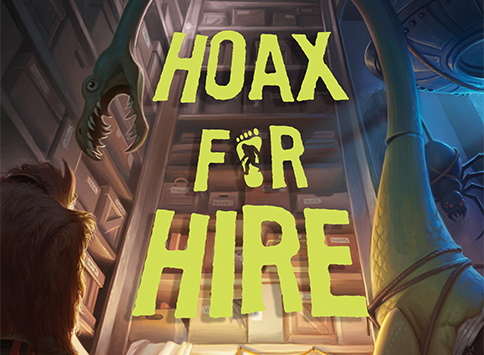 Have You Seen These Cryptids? | HOAX FOR HIRE 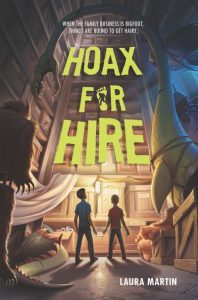 If I asked you what a cryptid is, the odds are you’re going to stare at me like I have three heads. Now, if I asked about Bigfoot, you could probably tell me a whole lot more. After writing the Edge of Extinction series, I was no stranger to research. And honestly, I didn’t think there would be anything more fun to research than dinosaurs. Well, it turns out, I thought wrong. The research that went into Hoax for Hire ranged from the bizarre to the downright weird. Want to see something ugly? Go do a google search for a Fiji mermaid. Yuck and double yuck. But the more I learned about cryptids, the creatures that live primarily in mystery, legend and imagination, the more interesting it all got. I was Alice falling down the rabbit hole, and I had to remind myself that while spending hours researching the ancient sea monster that’s swimming around in Switzerland is fun, it doesn’t get a book written.

My favorite sea monster I stumbled upon in my research actually wasn’t the infamous Loch Ness Monster. Call me weird, and many have, but it’s the same reason I didn’t put a T-Rex on the cover of my Edge of Extinction books. Like her buddy the T-Rex, Nessie is just a little over done. We’ve all heard of her, seen the infamous surgeon’s photo that turned out to be a hoax, and her champion hide and sea status is legendary. But Champ? Now unless you live in Vermont and regularly visit Lake Champlain, the odds are that you’ve never heard of the sea monster that’s been spotted over two hundred times with sightings dating back as far as 1609. The fact that P.T. Barnum once offered $50,000 for poor Champ’s hide just makes Champ that much cooler, and it’s also probably one of the reasons Champ is now protected by law. Sorry Mr. Barnum, better luck with your next sea monster.

According to eye-witnesses, Champ is anywhere from 8-10 to 187 feet long, it all depends on who you ask. But almost everyone agrees he has a long serpent like neck and a head like a horse. He’s almost upended tourist boats, scared the daylights out of a bunch of railroad workers, and made his way into Native American legends under the name Tatoskok. So, of course, he made his way into my book as well.
Close behind Champ was my second favorite cryptid, the U-28 Sea Monster. This cryptid is so bizarre he has only been seen once when he had the misfortune of getting blown into the sky by an exploding submarine. I knew when I stumbled upon this particular story that I had to find a way to work it into Hoax for Hire, so I handed it off to Grayson’s grandfather. What I love about this particular story is the authenticity and mystery that seem to surround it simultaneously. This cryptid was reported by a submarine captain during World War I, and if you know anything about submarine captains, they aren’t prone to exaggeration.

According to Commander Freiherr George G. von Forstner his submarine torpedoed a British steamer called the Iberian. The Iberian sunk quickly and disappeared beneath the water. And usually, that’s where the story of a torpedoed ship stops, but not this time. About twenty-five second later there was an explosion under the water and a sixty-foot-long creature was blasted almost one hundred feet into the air. Forstner and his officers watched in amazement as what appeared to be a gigantic crocodile with four large webbed feet landed and thrashed around in the wreckage before disappearing from view. There are a lot of theories about what this strange creature might have been, but the most popular one is that it was a prehistoric mosasaur, a creature that should have been extinct for millions of years.
I heard once that we know more about outer space than we know about the ocean, and this story seems to prove it, doesn’t it? Who knows what else the murky depths of the ocean is hiding? The more I researched for Hoax for Hire the more strange creatures popped out of the pages of history. I fell in love with these small accounts of the unexplainable that reminded me that the world still holds so many mysteries just waiting to be discovered, and who knows, maybe they’ve been waiting for you to discover them!