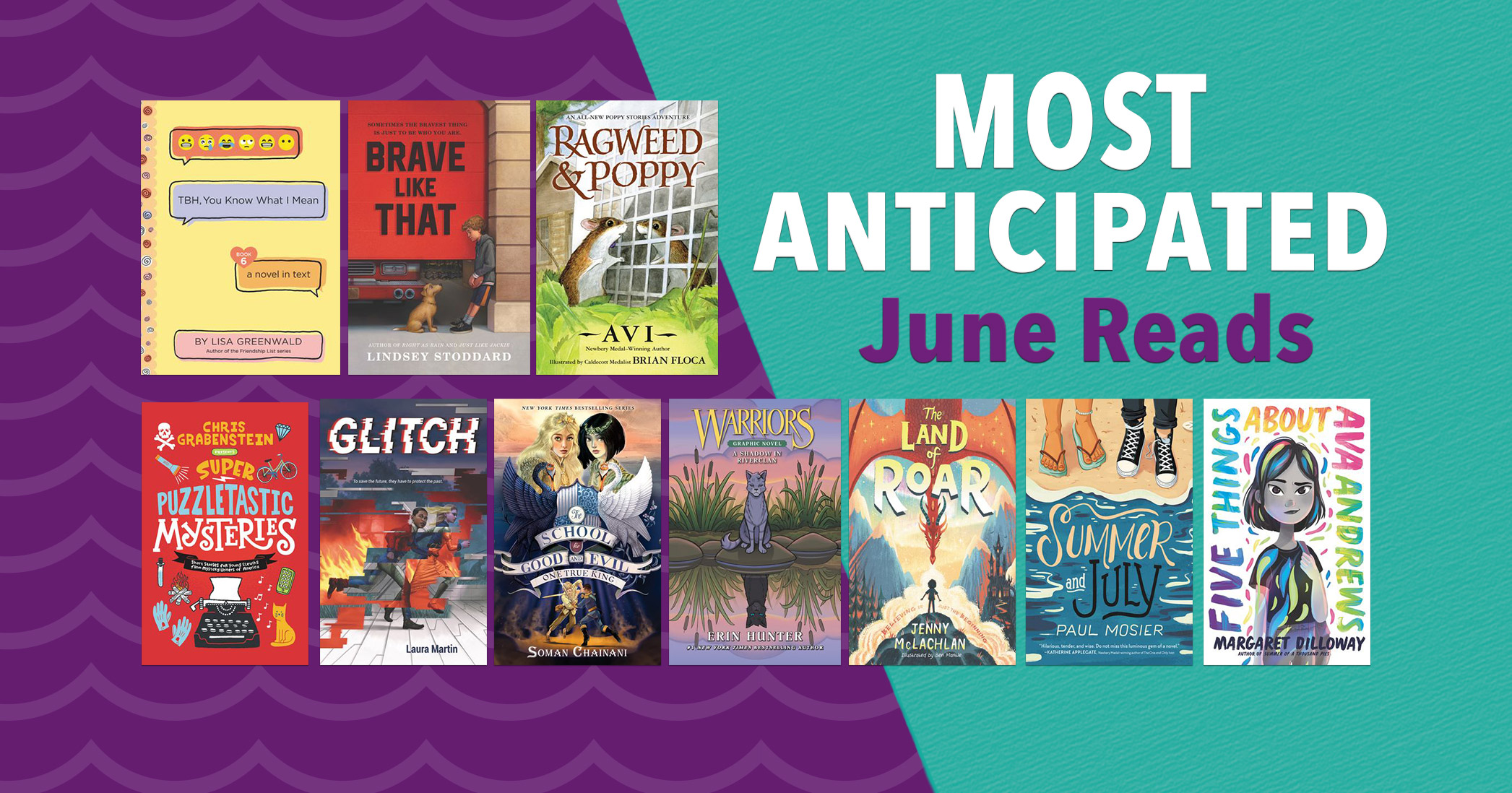 We can’t believe it’s June already. Hopefully wherever you are the weather is nice and the feeling of summer is in the air. And nothing says ‘Summer Time’ quite like summer reading! There are lots of great books coming out this month for readers ages 8-12. Here are just a few that we’ll definitely be adding to our shelves!

1. The School for Good and Evil #6: One True King by Soman Chainani 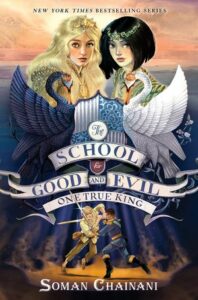 The thrilling conclusions to this bestselling fantasy series!

Beyond Good and Evil. Beyond Ever Afters.

The fairy tale of Sophie and Agatha comes to a dramatic conclusion.

Who will sit on Camelot’s throne and rule the Endless Woods? Who will be the One True King? Prepare yourself for the End of Ends . . . 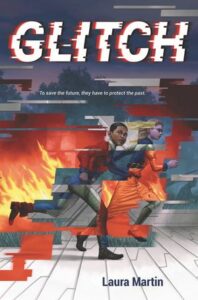 Regan Fitz and Elliot Mason have been enemies since they started training to become Glitchers—people who travel through time to preserve important historical events. But everything changes when they find a letter from Regan’s future self, warning them about an impending disaster that threatens them and everyone they know.

Will they be able to set aside their past in order to save the future? 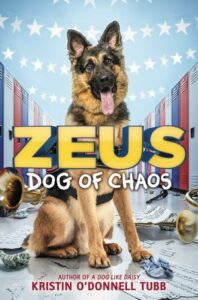 Dog lovers will want to get their paws on this one!

Zeus comes from a long line of heroic dogs, and he dreams of glory as a K9 commander. But he receives a much more dangerous assignment—middle school! And as all good service dogs know, the only way to get through hostile territory is by being invisible.

Zeus’s new human, Madden, is diabetic, and he wants to be invisible, too. That’s hard to do with a huge German Shepherd at his side to alert him when his blood sugar drops. And it’s even harder because Madden makes this noise called music that draws attention. Zeus’s mission becomes clear: he must destroy music.

While Zeus’s training prepared him for his most important job—keeping Madden safe—he discovers the human world is complicated. As Madden dreams of winning the state band competition and tries to reconnect with his mom, the lieutenant, Zeus must learn that, sometimes, you need to stand out to fulfill your duty. 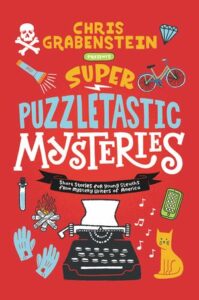 For the mystery reader!

From tales of hapless superheroes and stolen squirrel monkeys to murderous triplets and haunted basements, these thrilling, puzzling, and hilarious cases have one thing in common—YOU get a chance to be the detective before the author reveals the solution.

With twenty-never-before-published mysteries stories, this collection will leave young detectives sleuthing for more! 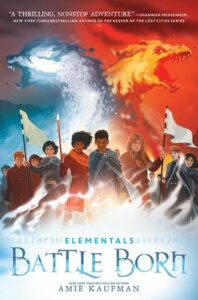 The final book in this shape-shifter series!

Though Anders and his friends have delayed a war between ice wolves and scorch dragons, their mission is far from over. With adults on both sides looking for them, they’ve sought refuge in Cloudhaven, a forbidden stronghold that could hold the key to saving their home.

Meanwhile, Holbard has been ravaged, and its citizens are reeling. Many have been forced into bleak camps outside the city, and food is running short.

To rebuild Vallen and unite scorch dragons, ice wolves, and humans, Anders and Rayna must put everything on the line…before the damage done is beyond repair. But the price of peace may hit closer to home than they could’ve ever imagined.

6. Ragweed and Poppy by Avi 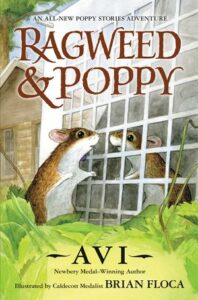 A beloved series for more than ten years!

How did Ragweed and Poppy meet and become friends? This book tells their hilarious story! Adventurous golden mouse Ragweed is on a freight train leaving the city of Amperville. On his journey he meets Lotar, a young, annoying, and lost raccoon who’s desperate to reunite with his mother. Though Ragweed doesn’t really want to help the raccoon, by doing so he winds up in Dimwood Forest.

Ragweed is now ready to strike off on his own, but it’s not long before he hears a cry for help. Following the sound of the voice, he finds a cage with a deer mouse trapped inside. When he asks the mouse’s name, she replies, “Poppy.”

The way Ragweed comes to Poppy’s aid, and how Poppy comes to his, is how their rousing and fateful friendship begins. As for that annoying raccoon, he keeps getting in the way. 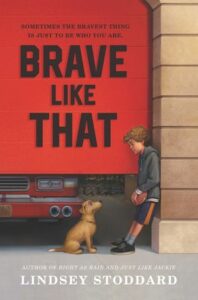 Cyrus Olson’s dad is a hero—Northfield’s former football star and now one of their finest firefighters. Everyone expects Cyrus to follow in his dad’s record-breaking footsteps, and he wishes they were right—except he’s never been brave like that. But this year, with the help of a stray dog, a few new friends, a little bit of rhythm, and a lot of nerve, he may just discover that actually…he is. 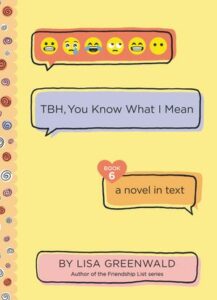 TBH, sometimes boys say dumb things about girls. And Cece is sick of it!

When she leads a super-successful event at school to raise awareness, everyone starts looking to her to take charge—of everything. Prianka needs ideas for National Poetry Month, Victoria wants advice on volunteer projects, and Gabby needs homework help.

To be honest, being a leader is fun but the pressure is OOC (out of control)! Can Cece help her friends without totally losing it herself? 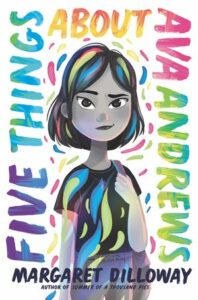 Eleven-year-old Ava Andrews has a Technicolor interior with a gray shell. On the inside, she bubbles with ideas and plans. On the outside, everyone except her best friend, Zelia, thinks she doesn’t talk or, worse, is stuck-up. What nobody knows is that Ava has invisible disabilities: anxiety and a heart condition.

Ava hopes middle school will be a fresh start, but when Zelia moves across the country and Ava’s Nana Linda pushes her to speak up about social issues, she withdraws further. So Ava is shocked when her writing abilities impress her classmates and they invite her to join their improv group, making up stories onstage. Determined to prove she can control her anxiety, she joins—and discovers a whole new side of herself, and what it means to be on a team.

But as Ava’s self-confidence blossoms, her relationship with Zelia strains, and she learns that it isn’t enough just to raise your voice—it’s how and why you use it that matters.

10. Summer and July by Paul Mosier 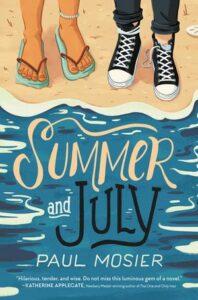 For readers of Rebecca Stead!

Twelve-year-old Juillet is preparing for the worst summer ever. She and her mom are staying in the seaside neighborhood of Ocean Park, California, for a month, where her mom will be working at the local hospital and Juillet will be on her own, like always.

Her dad is off in Europe with his new girlfriend, and her best friend, Fern . . . well, Juiller isn’t allowed to talk to Fern anymore. Fern took the blame for Juillet’s goth-girl clothes and “not-real” fears, like sharks and rip currents and the number three.

Then Juillet meets Summer, a local surfer girl who knows the coolest people and places around town. With free-spirited and adventurous Summer, Juillet begins to come out of her shell and face the things weighing her down. But when Summer reveals her own painful secret, it’s Juillet’s turn to be the strong and supportive friend.

11. The Land of Roar by Jenny McLachlan 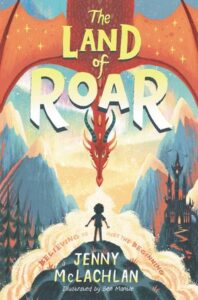 When Arthur and Rose were little, they were the heroes of Roar, a magical world they invented where the wildest creations of their imaginations roamed. Now that they’re eleven, Roar is just a distant memory. But it hasn’t forgotten them.

When their grandfather is spirited away into Roar by the villain who still haunts their nightmares, Arthur and Rose must go back to the world they’d almost left behind. And when they get there, they discover that Grandad isn’t the only one who needs their help.

12. Warriors: A Shadow in RiverClan by Erin Hunter 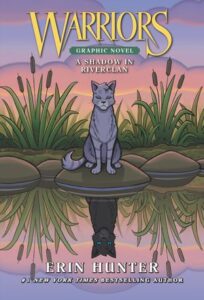 When RiverClan fell under the rule of the vicious Tigerstar, Feathertail barely escaped with her life. Now RiverClan is trying to rebuild in unity and peace—even if Feathertail isn’t ready to forgive her Clanmates.

But when RiverClan takes in a rogue cat named Sasha and her two kits, Feathertail must find a way to escape the shadows of the past if she is to be a part of her Clan’s future.