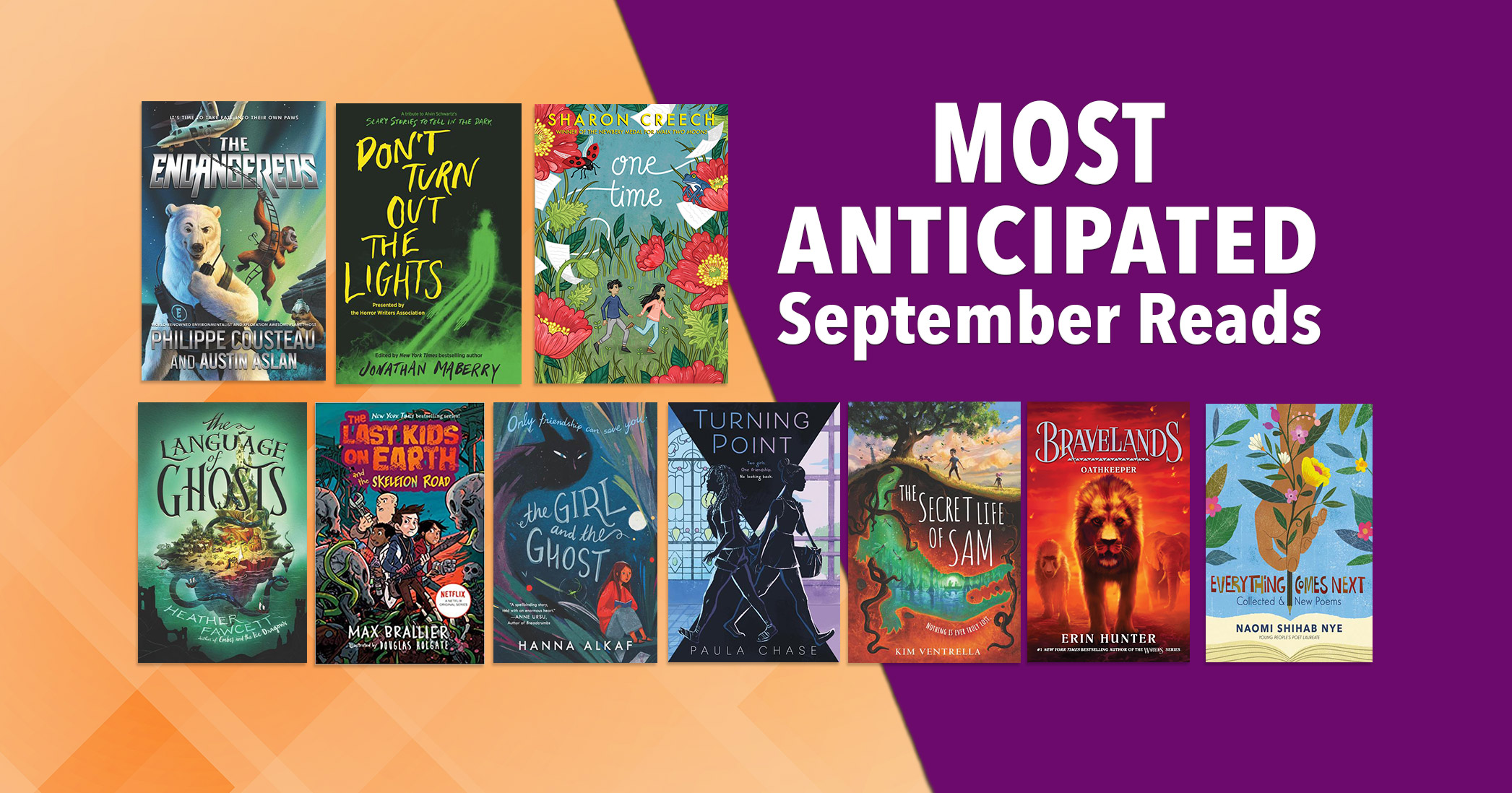 Well, we made it! Summer is officially over and September is here. Kids are headed back to school (either in-person or virtually) and before we know it the weather will turn crisp and the leaves on the trees will go from green to orange and brown. To celebrate the coming of fall, here are 16 new books for kids 8-12 to add to your young reader’s TBR list!

1. Don’t Turn Out the Lights by Jonathan Maberry 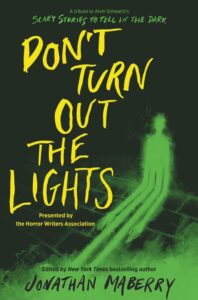 For fans of Scary Stories to Tell in the Dark!

Flesh-hungry ogres? Brains full of spiders? Haunted houses you can’t escape? This collection of 35 terrifying stories from the Horror Writers Association has it all, including ghastly illustrations from Iris Compiet that will absolutely chill readers to the bone.

So turn off your lamps, click on your flashlights, and prepare—if you dare—to be utterly spooked!

2. The Endangereds by Philippe Cousteau and Austin Aslan 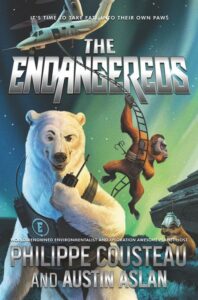 Innocent animals are in trouble: temperatures are climbing, tides are rising, and nature is suffering. Someone needs to step in to rescue animals from extinction. Someone needs to turn this mess around, before it’s too late.

And that someone is . . . the Endangereds, the unlikeliest heroes you’ll ever meet—a superstrong polar bear, a pangolin with a genius for engineering, an extremely sarcastic narwhal, and an orangutan with a big dream.

Together, these four daredevils are determined to save endangered species across the globe, no matter what the risk. Rappelling into an underground cavern to save the day? No problem. Looping video footage to sneak through buildings unnoticed? Got it covered. Opening a doorknob? Okay, pretty hard without thumbs. But don’t worry. No matter what it takes, the Endangereds will get the job done. 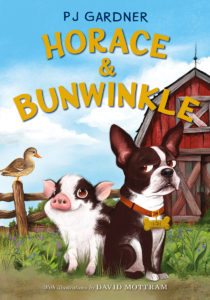 Horace Homer Higgins III despises dirt. And the outdoors. And ducks. But when his person, Eleanor, moves to a farm called the Homestead, the anxious Boston Terrier is forced to adapt. As if that isn’t enough to strain his nerves, Ellie adopts a perpetually cheerful potbellied pig named Bunwinkle to be his baby sister.

Bunwinkle is delighted to be on the farm despite the stuffy demeanor of her new canine brother. She’s sure she’ll crack his shell eventually—no one can resist her cuteness for long—especially once they bond over watching a TV pet-tective show.

When the duo discovers that neighborhood animals have been disappearing, they decide to use their new detective skills to team up to solve this barnyard mystery. Is it a mountain lion? Or their suspiciously shot-loving veterinarians?

Only one thing seems certain: if they don’t figure it out soon, one of them might be next!

4. The Language of Ghosts by Heather Fawcett 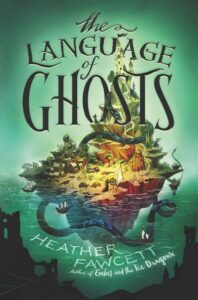 Forced into exile on an enchanted, moving island, ex-princess Noa Marchena has two missions: reclaim her family’s stolen throne and ensure that the dark powers her older brother, Julian, possesses don’t go to his head in the process. But between babysitting her annoying little sister, Mite, and keeping an eye on the cake-loving sea monster that guards the moving island, Noa has her hands full.

When the siblings learn that their enemies are searching for a weapon capable of defeating Julian—whose legendary spell weaving is feared throughout the kingdom—once and for all, they vow to get to it first. To everyone’s surprise, the key to victory turns out to be a long-lost magical language—and only Noa can speak it.

But what if by helping her brother, Noa ends up losing him?

5. One Time by Sharon Creech 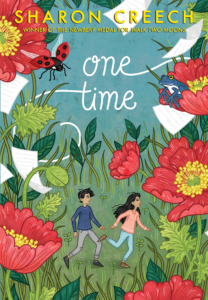 Gina Filomena has been told she has an overactive imagination. With her bright clothing and artistic spirit, she’s always felt different from the other kids in her class. That is, until she meets her new neighbor, a mysterious boy named Antonio with a wide, welcoming smile.

Add in a creative new teacher, Miss Lightstone, and a world of possibilities opens up for Gina, Antonio, and their classmates. With the help of Antonio and Miss Lightstone, will Gina find the answers to the questions Who am I? and Who do I want to be?

6. Everything Comes Next by Naomi Shihab Nye 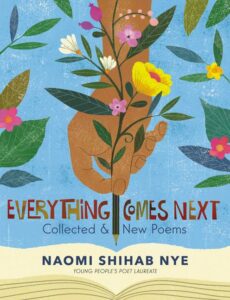 From the Young People’s Poet Laureate!

Everything Comes Next is a treasure chest of Naomi Shihab Nye’s most beloved poems. From favorites such as “Famous” and “A Valentine for Ernest Mann,” to the widely shared “Kindness” and “Gate A-4,” this collection celebrates her term as Young People’s Poet Laureate. The book is an introduction to the poet’s work for new readers as well as a comprehensive edition for classroom and family sharing. Writing prompts and tips by the award-winning poet make this an outstanding choice for aspiring poets of all ages.

7. The Secret Life of Sam by Kim Ventrella 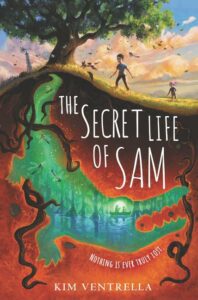 When Sam’s dad dies in a car accident, Sam is shuttled off to the dusty town of Holler, Oklahoma, to live with a long-lost aunt. There he encounters a mysterious mangy cat who leads him to an unassuming tree that turns out to be a portal—a passage through which Sam can revisit his old life for a few minutes at a time.

Sam’s visits to the bayou become stranger and stranger. Pa’s old stories unfold around him in beautiful but sinister detail, and Pa is not quite himself. Still, Sam is desperate to find a way for them to stay together—no matter what it takes. 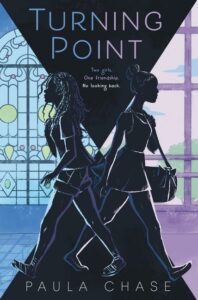 Best friends Rasheeda and Monique are both good girls. For Sheeda, that means keeping her friends close and following her deeply religious and strict aunt’s every rule. For Mo, that means not making waves in the prestigious and mostly White ballet intensive she’s been accepted to.

But what happens when Sheeda catches the eye of Mo’s older brother, and the invisible racial barriers to Mo’s success as a ballerina turn out to be not so invisible? What happens when you discover that being yourself isn’t good enough? How do you fight back?

9. A Whale of the Wild by Rosanne Parry 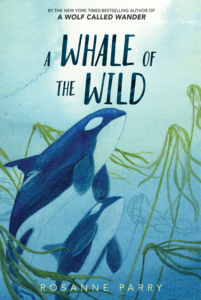 From the author of A Wolf Called Wander!

For Vega and her family, salmon is life. And Vega is learning to be a salmon finder, preparing for the day when she will be her family’s matriarch. But then she and her brother Deneb are separated from their pod when a devastating earthquake and tsunami render the seascape unrecognizable. Vega must use every skill she has to lead her brother back to their family. The young orcas face a shark attack, hunger, the deep ocean, and polluted waters on their journey. Will Vega become the leader she’s destined to be? 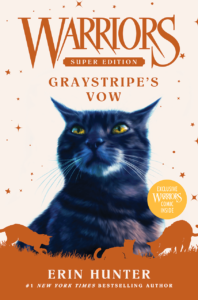 In this Super Edition, set during the events of The Broken Code, respected ThunderClan warrior Graystripe seeks a path to the Clan’s future by returning to his past—and the Moonstone in the Clans’ old forest territory. 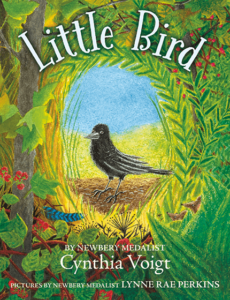 When a wild fisher cat attacks their nest, Little Bird and her flock are devastated. Not only does the fisher cat harm the fledglings, but it also makes off with the shiny pendant that the superstitious crows rely on for good luck. Little Bird believes that she can find the lucky pendant and return it to the nest before disaster strikes. The other crows aren’t so sure—after all, Little Bird is so little and undependable and meek.

But with the help of some new friends—including a very funny goat—Little Bird journeys through forests and over lakes and fields, challenging her wits and survival skills along the way. The crow who returns home is wiser, braver, kinder, and ready—at last—to spread her wings. 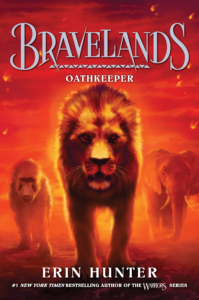 The last book in the Bravelands series!

At long last, the Great Herd is united against Titan—now so powerful that even Fearless, who vowed to avenge his father’s death, cannot defeat the rogue lion alone. Thorn may have a plan to bring about Titan’s downfall, but the animals of Bravelands must decide how much they are willing to risk—and who they are willing to lose. 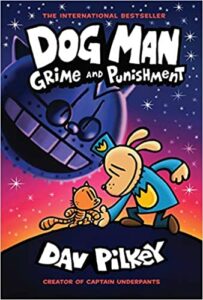 The Supa Buddies bamboozled the baddies, but all’s not right in the world. Dog Man has a new problem to pound, and he’s going to need his entire pack to help him. Will he go barking up the wrong tree? 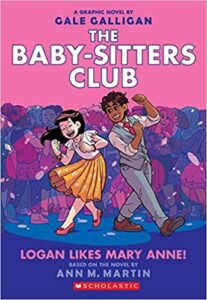 It’s the first day of a new school year, and while Mary Anne doesn’t know what to expect from the eighth grade, she’s looking forward to getting back into the swing of things. One thing she definitely doesn’t expect is to meet Logan Bruno, who just moved to Stoneybrook!

Logan has a dreamy southern accent, he’s awfully cute… and he might be interested in joining the BSC. But the baby-sitters aren’t sure if Logan would make a good club member, so they send him on a job with Mary Anne as a test. Logan and Mary Anne hit it off, but Mary Anne isn’t sure of where their friendship could go. Life in the Baby-sitters Club has never been this complicated — or this fun!

15. The Last Kids on Earth and the Skeleton Road by Max Brallier 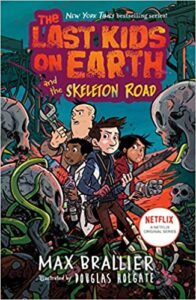 Now wielding the Midnight Blade, Jack Sullivan and the gang are furiously searching for the villainous Thrull and his skeleton army. The clock is ticking: the enemy has begun constructing the Tower–a portal with the power to bring Rezzoch the Ancient, Destructor of Worlds, to our dimension. Equipped with a crucial clue discovered by June on her Wild Flight, the group does the once-unthinkable: they leave Wakefield behind and embark on an . . . EPIC ROAD TRIP!

That means music blasting, kitschy roadside attractions, snacks snacks snacks, dangerous detours, and a slew of skeletons and monsters at every turn. But this is no ordinary post-apocalyptic joyride. Because soon, they are pursued by a new threat: the return of a monster they thought long dead, who has taken on a terrifying new form. Jack, June, Quint, and Dirk will be lucky to make it far enough to find the answers they seek. But when the future of the world depends on it, these heroes don’t pump the brakes–they go full throttle.

16. A Tale of Witchcraft by Chris Colfer 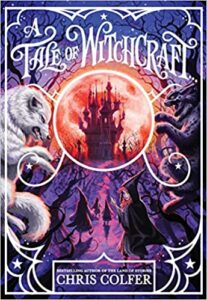 The sequel to A Tale of Magic!
When a mysterious new witch arrives at the academy, the celebrations are cut short. As the witch begins recruiting faeries into her rival school of witchcraft, it becomes clear she has dark intentions. And soon Brystal’s friend Lucy becomes embroiled in an ominous plot against mankind.
Elsewhere, the fragile peace is on the brink of shattering. Outrage has spread throughout the kingdoms in opposition to the legalization of magic. And, a dangerous and centuries-old clan known as the Righteous Brotherhood has resurfaced, with one goal in mind: to exterminate all magical life forever . . . starting with Brystal . . .
Previous Post Next Post