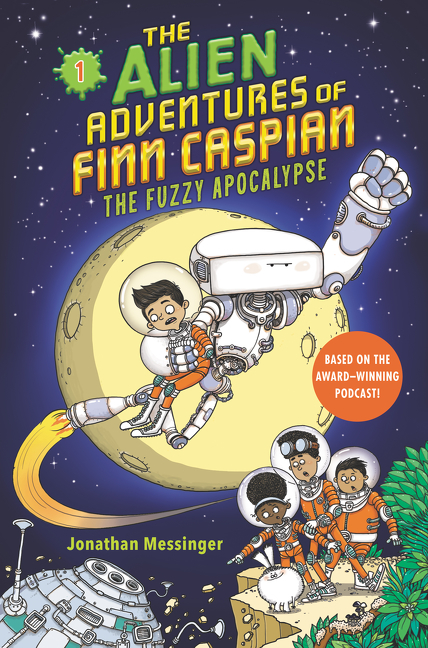 Explorer Troop 301 tries to save an exploding planet from a fluffy bunny and a devious alien in the first book of this funny, highly illustrated chapter book series based on the award-winning kids’ podcast!

Eight-year-old Finn is the first kid born in space and he spends his days looking for a new planet to call him with his three best friends and his robot, Foggy.

He’s used to wild, galaxy hopping adventures. But when Explorer Troop 301 gets stuck on a planet that’s about to explode, Finn and his friends will have to face giant aliens, a leader with mind control powers, and one evil, fluffy bunny rabbit in order to save the planet . . . and themselves.

Blast off into a brand-new adventure inspired by the popular award-winning kids’ podcast! Like the podcast, the books are sort of like Scooby-Doo meets Buffy the Vampire Slayer in space. The story centers on Finn Caspian, an 8-year-old boy aboard The Famous Marlowe 280 Interplanetary Exploratory Space Station. He and his friends Abigail, Elias, and Vale are Explorers Troop 301, taking off from the Marlowe to explore uncharted planets, help the occasional alien, and solve a mystery that threatens to destroy the Marlowe.

The books in this series are for kids ages 7 to 12 looking for a funny, illustrated story to tear through. They contain no violence, a little bit of suspense, and some aliens who are real chuckleheads...