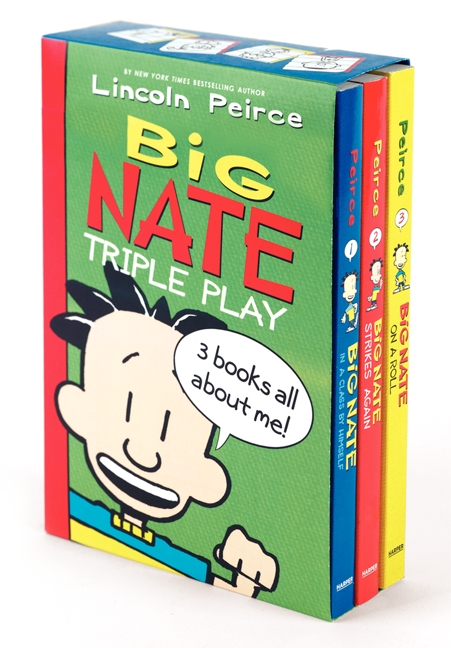 Three exclusive Big Nate paperbacks by Lincoln Peirce in one box! Big Nate, a New York Times bestselling series, is bigger than ever in this awesome box set. This Triple Play box set includes Big Nate: In a Class by Himself, Big Nate Strikes Again, and Big Nate on a Roll.

In Big Nate: In a Class by Himself, Nate knows he’s meant for big things. REALLY big things. But things don’t always go your way just because you’re awesome. Nate barely survives his dad’s toxic oatmeal before rushing off to school—minus his lunch. He body slams the no-nonsense principal. He accidentally insults his least favorite teacher, the horrifying Mrs. Godfrey (aka Godzilla). And school has barely started!

Big Nate Strikes Again: BIG NATE will surpass all others! But it won’t be easy. He’s stuck with Gina, his all-time enemy, in a class project for his least favorite teacher Mrs. Godfrey, aka Godzilla. To make matters worse, Gina ALSO ends up on his fleeceball team, right when Nate is set to win his first fleeceball championship ever. This is his moment for glory, but Gina's sure to steal his thunder, or ruin everything. Will Nate win or lose? Pass or fail? Or end up in detention . . . AGAIN?

Big Nate on a Roll was a 2012 ALA Quick Pick for Reluctant Young Adult Readers and a Junior Library Guild selection:

Nate's a big deal in his scout troop . . . until Artur—aka Mr. Perfect—joins. Now Nate's stuck in second place. And Artur means business. Will Nate take the grand prize? Or wipe out, big time?