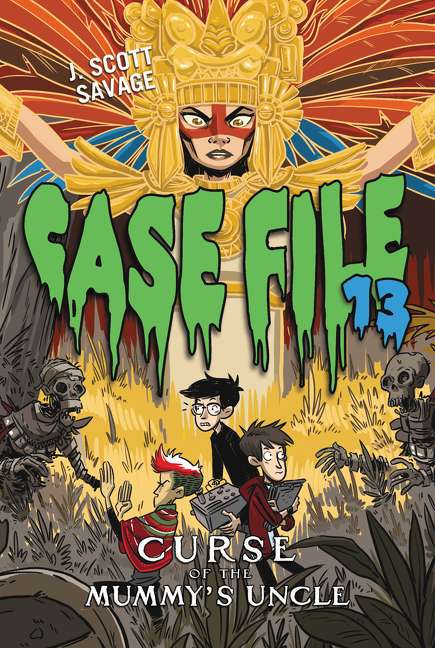 With thrills, chills, and laughs on every page, this fourth book in the tween series “sure to please young readers looking for a thrill” (Kirkus Reviews, starred review) follows three monster-obsessed best friends on a trip to a haunted Mexican pyramid.

The Three Monsterteers—Nick, Carter, and Angelo—have defeated the Zombie King, taken down a mad scientist, and even squared off with their own evil twins. But all that pales in comparison to the trio’s latest monster mystery, which begins with a family trip to Mexico to explore some forgotten Mayan pyramids alongside a group of archaeologists.

When the boys arrive at the archaeological site, they learn of a previous expedition that vanished into these very pyramids fifty years ago. Angelo is convinced that aliens must have been involved, but Nick starts to suspect that the disappearance had more to do with an ancient Mayan curse—one that may still hang over the ruins today. Using their knowledge of real Mayan mythology, the three friends must unravel the secret history of the curse—before someone very close to Nick ends up trapped in the underworld forever.

With the same “mix of creepy chills and laugh-out-loud humor” that made bestselling author James Dashner call Zombie Kid “the perfect book,” this fourth book in the Case File 13 series will leave you rolling in your tomb.