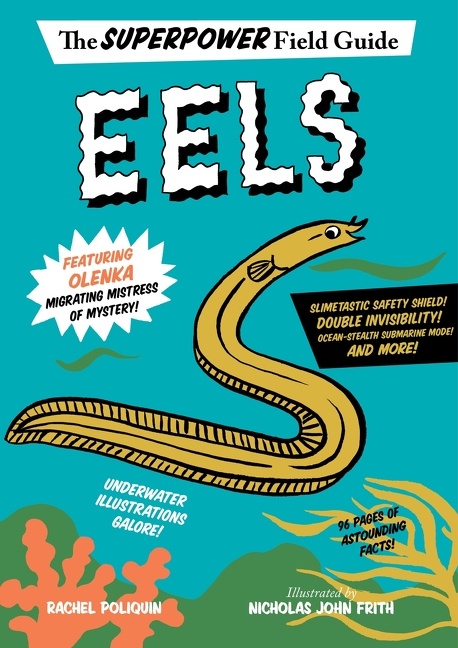 This fourth installment in the hilarious and highly illustrated full-color Superpower Field Guide series features Olenka, an ordinary eel. Olenka may be slimy, wiggly, and the color of mud, but never, ever underestimate an eel.

Meet Olenka, an ordinary eel. Did I hear you say, “But aren’t eels just long slippery slimy fishy-things that . . . hmm . . . .  Is there anything else to know about eels?” You bet your buttons there is!
Sit back and hold on tight, because Olenka is going to amaze you with superpowers such as double invisibility and shape-shifting, and the super secret Lair of the Abyss  (that means a top-secret deep-sea hideout). In fact, Olenka's life is so impossibly extraordinary, it has baffled the smartest scientists in the world for thousands of years.
“Impossible!” you say. I say, "you don’t know eels." But you will.
Includes a ruler printed along the edge of the book’s back cover to aid the observations of young field scientists everywhere!