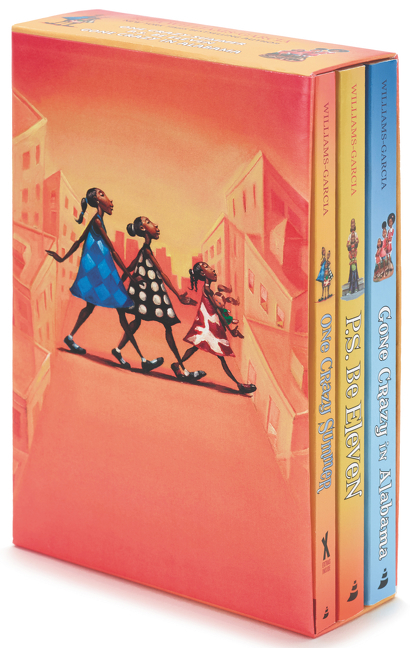 Each humorous, unforgettable story follows the Gaither sisters as they grow up during one of the most tumultuous eras in recent American history, the 1960s.

Read the adventures of eleven-year-old Delphine and her younger sisters, Vonetta and Fern, as they visit their kin all over the rapidly changing nation—and as they discover that the bonds of family, and their own strength, run deeper than they ever knew possible.

This box set includes One Crazy Summer, a Newbery Honor book, National Book Award finalist, and winner of the Scott O’Dell Award; P.S. Be Eleven; and Gone Crazy in Alabama, all of which will make the perfect addition to a young reader’s growing library.

Readers who enjoy Christopher Paul Curtis's The Watsons Go to Birmingham and Jacqueline Woodson’s Brown Girl Dreaming will find much to love in these books. Rita Williams-Garcia's books about Delphine, Vonetta, and Fern can also be read alongside nonfiction explorations of American history such as Jason Reynolds's and Ibram X. Kendi's books.

“The Gaither sisters are an irresistible trio. Williams-Garcia excels at conveying defining moments of American society from their point of view.” —Publishers Weekly (starred review)