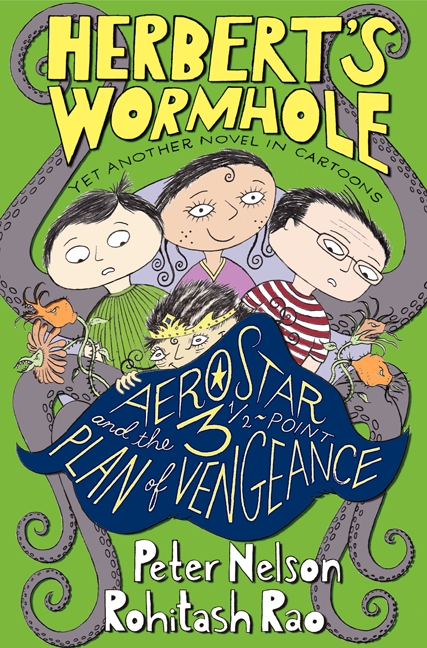 Herbert’s Wormhole: AeroStar and the 3 1/2-Point Plan of Vengeance

Herbert’s Wormhole: AeroStar and the 3 1/2-Point Plan of Vengeance

Readers of Diary of a Wimpy Kid and Big Nate will love Herbert's Wormhole 3: Aerostar and the 3 1/2-Point Plan of Vengeance, the thrilling and irreverent conclusion to the series that began with Herbert's Wormhole, which J. K. Rowling called "absolutely wonderful—fast-paced, inventive, engaging, and hilarious."

Herbert, Alex, and Sammi were pretty sure their adventures in the future were over—until they discover that their old nemesis, GOR-DON, has come back to present-day Merwinsville to mess with things. And he's not alone. He is working for an evil genius, perhaps the greatest villain our heroes have yet faced—Sammi's future self, a.k.a. Aerostar, a power-mad, vengeance-fueled tyrant with twisted delusions of superheroism. This 111-year-old was the president of ClemCorp, the company responsible for trashing the Earth, the company the G'Daliens destroyed to save it, and now she wants revenge. And it's going to be up to our heroes to once again don the mantle of the AlienSlayers and somehow try to save the past, present, and future from total annihilation.