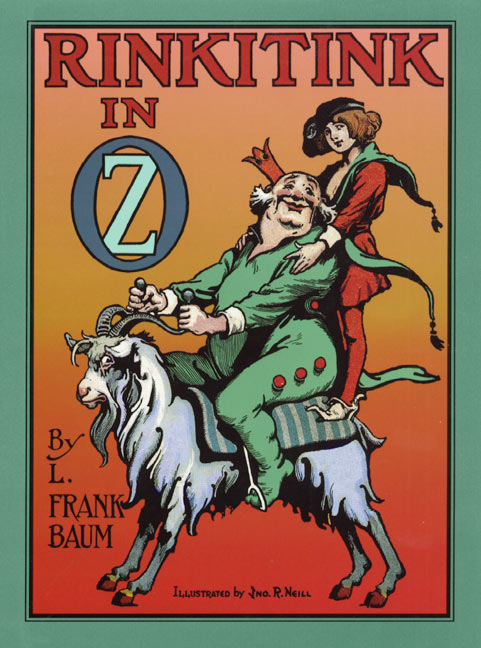 A thrilling tale of adventure from a master storyteller, Rinkitink in Oz is sure to enjoyed by Oz fans far and wide and by all who delight in tales of enchantment and adventure.

Meet Rinkitink—a kindhearted king who's as jolly as old Saint Nick himself! When the jovial monarch sails for a visit to the island kingdom of Pingaree, he and his talking goat, Bilbil, are welcomed with open arms. Before long, Rinkitink's lighthearted ways and merry songs endear him to the king and queen of Pingaree, as well as to their son, Prince Inga.

But when the peaceful isle is invaded by fierce warriors, everyone from the rulers to the smallest child is taken off in chains. Only Prince Inga, Rinkitink, and Bilbil escape the conquerors. And so the three friends set out—aided by the magical Pearls of Pingaree—to rescue the prince's people.

Their perilous quest takes them across the vast Nonestic Ocean to the terrible islands of Regos and Coregos to the dark underground domains of the Nome King. Victories are followed by setbacks, which are in turn followed by strokes of good fortune. Just when it seems our friends have met their match in the clever Nome King, Dorothy and the Wizard of Oz arrive to lend a hand.

First published in 1916, this handsome new edition of a much-loved classic features all twelve of John R. Neill's original color plates as well as his nearly one hundred black-and-white drawings.

When the king and queen are kidnapped and their country enslaved, it's up to the handsome young prince and his friends to save the day. But to defeat such foes as the Chuggenmugger—a beast so ferocious it devours dragons—even the prince must receive help from Dorothy, the Wizard, and their Oz companions. With all twelve of the original full-color plates, this handsome new edition of a beloved classic is sure to be enjoyed by all.