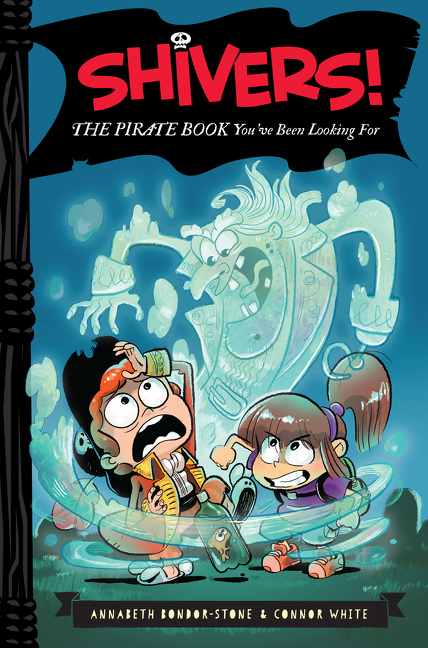 Shivers!: The Pirate Book You’ve Been Looking For

Shivers!: The Pirate Book You’ve Been Looking For

Shivers, the pirate who’s afraid of everything, is back in his third laugh-filled, illustrated adventure from Story Pirates stars Annabeth Bondor-Stone and Connor White. Can Shivers and his friends cure the curse cast by the most pungent ghost of all time, Quincy Thomas the Pirate?

Now that Shivers has a brand-new, just built, scare-proof ship, the Groundhog, things have FINALLY taken a turn for the cozy. There’s just one problem—not a SINGLE drop of water can fall on the ship’s deck for its whole first day a-sail or the pirate who owns it will be CURSED.

There’s just one more problem—on Shivers’s first night on the ship, there’s the biggest thunderstorm since ol’ Davey Jones opened his locker for the first time.

Now guess who’s about to get cursed?

With his best friend, Margo, and loyal fishmate, Albee, to pull him up by his bunny slippers, Shivers and his fellow buccaneers belly flop into another adventure filled with soggy socks and posh poodles to sniff out the pungent ghost of Quincy Thomas the Pirate to cast off the curse before he stinks up the Groundhog’s poop deck for all of eternity!

It’s another hilarious highly illustrated adventure from the Story Pirates themselves and stars of KidLitTVs’ “The Truth About Libraries,” Annabeth Bondor-Stone and Connor White.