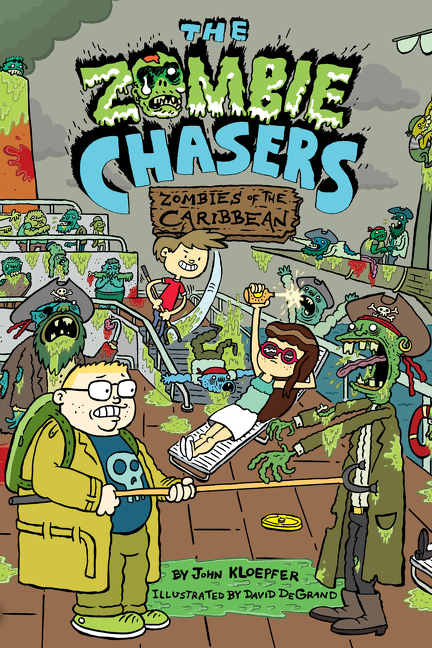 The Zombie Chasers #6: Zombies of the Caribbean

The Zombie Chasers #6: Zombies of the Caribbean

The Zombie Chasers take to the high seas!

The sixth installation of the wildly popular Zombie Chasers tween series from John Kloepfer, perfect for fans of Diary of a Wimpy Kid and reluctant readers everywhere, with hilarious black-and-white illustrations by David DeGrand, this story is full of middle school shenanigans, and fast-paced gore-larious adventures!

Zack Clarke and his team—Zoe, Rice, Ozzie, Madison, and Olivia—have fled the infested coasts of Florida, chased by a ravenous mob of super zombies. With no antidote in sight, there's only one person who can help them now: an eccentric explorer—and renowned zombie expert—who's lying low in a zombie-proof bunker somewhere in the Caribbean.

As the pals fend off decomposing pirates, crusty crew mates, and putrid sea creatures, they race to uncover the cure for zombies everywhere. But will they be able to defeat the zombies of the Caribbean before the cure and their plan go overboard?