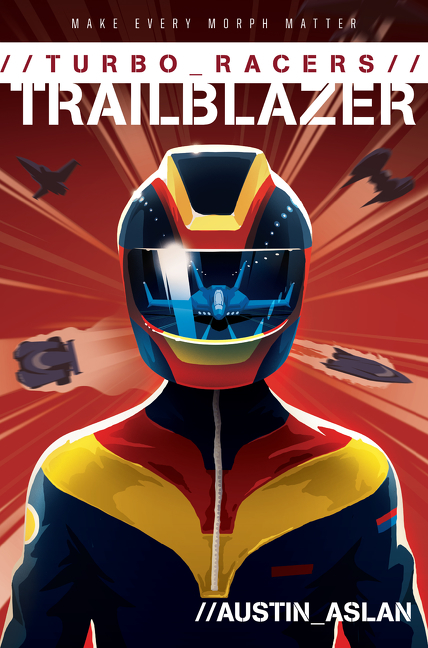 In Turbo Racers: Trailblazer, twelve-year-old Mace Blazer gets the chance to pilot a state-of-the-art vehicle that transforms at the touch of a button from race car to jet plane to single-person sub, in the biggest race in the world.

The roar of the crowd, the glow of the spotlight, the thrill of the race—Mace Blazer dreams of going TURBO.

TURBOnauts thrive on the thrum of trimorphers’s rocket engines as the vehicles morph from super-powered race cars to speeding jet aircrafts to torpedo-fast submarines, while they race full-throttle around every bend. And Mace believes he’s got what it takes to join their ranks—he only needs the chance to prove it.

So when a reclusive retired racer chooses Mace to try out to be part of the next generation of TURBOnauts, Mace knows that this is his moment to show what he can do. But the path to his big shot means facing down the best and the brightest from around the world. Mace will have to live more fearlessly, hone quicker reflexes, be revolutionary—but will it be enough?

Mace quickly realizes that everything he’s ever hoped for comes at a price. He’ll have to decide between what is right and what is easy. Every morph counts in the first book in this exhilarating new adventure series by the acclaimed author of The Islands at the End of the World, Austin Aslan.

This is the first title in a high-stakes middle-grade two-book series!