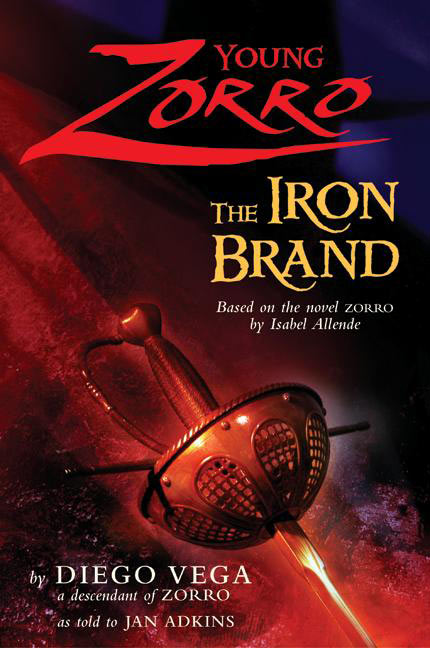 Sandwiched between the ocean and the mountains surrounding the Pueblo de Los Angeles, wealthy Spanish caballeros live side by side with Native Americans. One boy with both Spanish and Indian blood belongs to both worlds. He is Diego de la Vega, who will one day wear the mask of Zorro.

As a boy Diego is more concerned with riding horses and making mischief with his best friend, Bernardo, than about fighting injustice. But when men start disappearing from the pueblo of Los Angeles and cattle are missing from Diego's father's rancho, Diego and Bernardo encounter an injustice so wicked that they must take action.

Inspired by Isabel Allende's novel Zorro, which reveals how Diego de la Vega became the legendary masked hero, Young Zorro: The Iron Brand introduces readers to a land of vaqueros and kidnappers -- an exciting world in which a young hero is formed.

First introduced in 1919, the legend of Zorro, "the fox," swiftly grew into a phenomenon. A hero of Spanish California with a dual identity, Zorro has vanquished evildoers and conquered hearts in books, movies, and television series around the world. Most recently the Zorro tale has been brought to life by Antonio Banderas and Catherine Zeta-Jones in the 1998 major motion picture The Mask of Zorro and its 2005 sequel, The Legend of Zorro.